Hydatid disease or human echinococcosis is a zoonotic infection caused by the larval forms of the genus Echinococcus [1]. It is endemic in areas where dogs and livestock coexist[2] and is prevalent worldwide .Humans are intermediate or accidental hosts and contract the disease by means of contamination through direct contact with the definitive host or its feces or by ingesting infected food[2].Primary spinal involvement occurs in only 1% of all cases [2,3,4,5]. Extensive spinal involvement proposes a challenge for the treating surgeon and makes it nearly impossible to remove entire cysts in-Toto [6].Intra operative rupture of cyst can lead to anaphylaxis, local recurrence and dissemination of hydatid disease, increasing morbidity. In this report we present a case of primary hydatid disease involving vertebral bodies with extensive extradural paravertebral soft tissue involvement causing cord compression .Patient was treated with surgical decompression and spinal stabilization along with medical therapy.

A 40 year old male presented with complaints of low back ache and progressive bilateral lower limb weakness and decreased sensations below the inguinal region of two months duration. One month after onset of the initial symptoms he was unable to walk without support and developed urinary frequency and constipation. On examination, he had spastic paraparesis with power 4-/5 bilaterally. The deep tendon reflexes were brisk in both the lower limbs with extensor Babinski reflex. He had hypoesthesia for all sensations below Dorsal (D)-10 dermatome bilaterally .Local examination of spine did not reveal any deformity, swelling or tenderness. Magnetic resonance imaging (MRI) of the dorsolumbar spine revealed multiple small round to oval well defined lesions in the D11-12 vertebral bodies, disc space, epidural and paraspinal soft tissue. The lesions were hypointense on T1 weighted images and brightly hyperintense on T2 weighted images with bright peripheral contrast enhancement. The involved vertebral bodies were collapsed and along with the epidural lesions caused cord compression [Fig 1]. 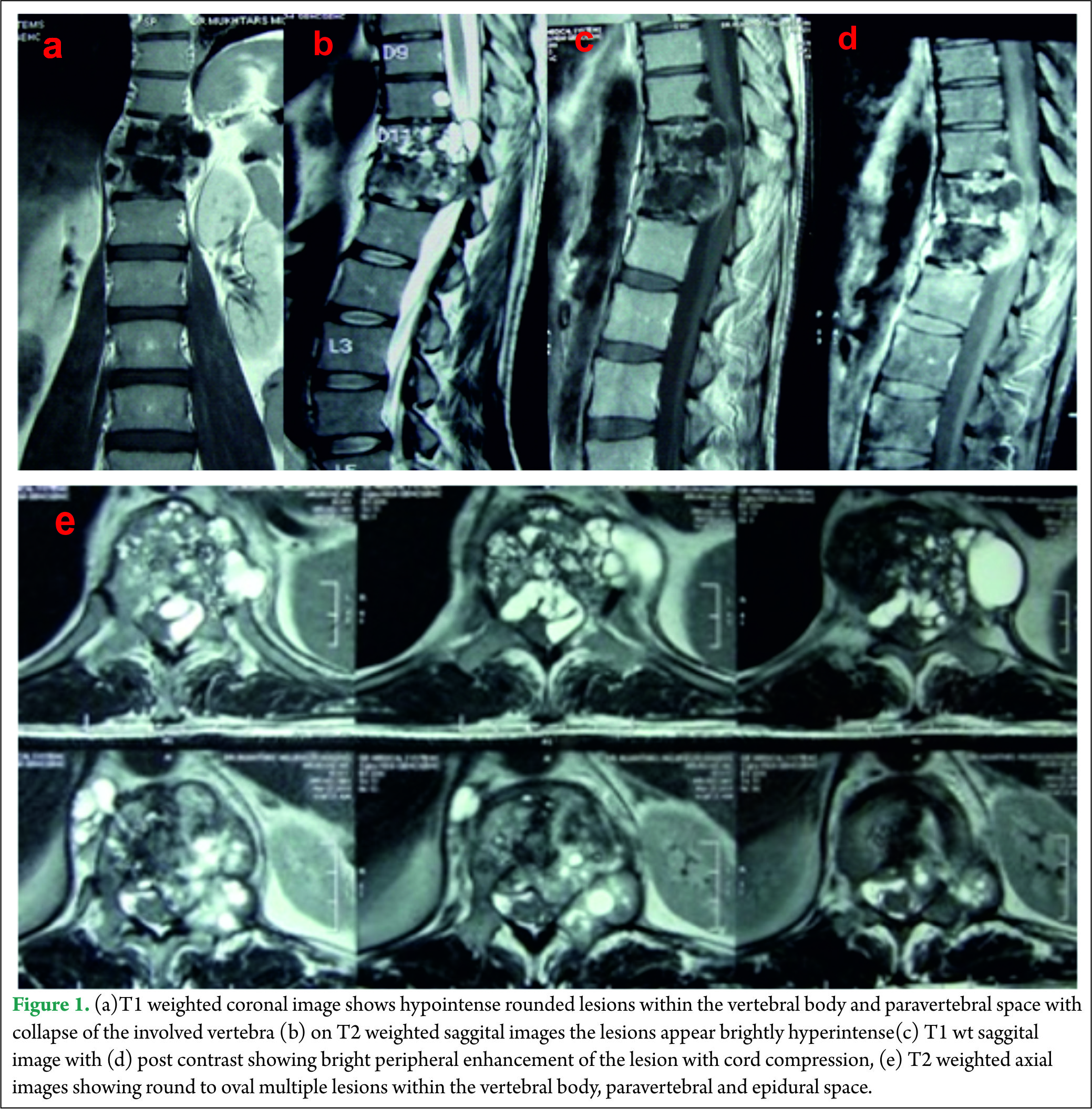 All his hematological investigations were normal except an erythrocyte sedimentation rate (ESR) of 28 mm/hour and ELISA (Enzyme linked immunosorbant assay) was strongly positive for Echinococcal antigen. Chest x-ray and ultrasound abdomen was normal. He underwent a laminectomy at D11-12 with wide excision of epidural cysts and partial corpectomy of diseased D11-12 vertebral body. Cysts were thin walled pearly white containing clear fluid [Fig 2]. Paraspinal soft tissue lesions were also excised. There was intra operative rupture of the cyst. 3% hypertonic saline was used as scolicidal agent for irrigation of the operative field. Thereafter spinal fusion and stabilization was done using a titanium cage with autologous bone graft placed between D10 and L1 vertebral bodies and D10-L1 fused using titanium pedicle screws and laminar hook [Fig 3]. Post operatively the patient was started on oral Albendazole 10 mg/kg /day for 3 months. Power in both the lower limbs had improved to 4+/5 with complete relief from back pain and subjective improvement in sensations by 50%.

Cystic hydatid disease is caused by infection with larval form of the tapeworm Echinococcus granulosus and mostly seen in areas where sheep and cattle are raised. Adult worms mature in the intestine of dog, wolf, and other carnivorous animals (definitive host), and eggs are released in feces [2]. Intermediate hosts such as sheep and cattle ingest the eggs. Human are accidental intermediate hosts and contract the disease by means of contamination through direct contact with the definitive host or its feces or by ingesting food infected with parasite eggs [2]. Oncospheres hatch in duodenum, which penetrate intestine and enter portal circulation [2,5,7].Liver and lungs trap oncospheres that migrate from intestine to the portal circulation which then develop into hydatid cysts. Although liver (75%) and lungs (15%) are the most commonly involved organs, the disease can be seen anywhere in the body [4,8]. Bone is involved in 0.5 to 4% of the cases of hydatid disease [4,9].Primary spinal hydatid cysts account for 1% of all cases of hydatid disease [2,5,10]. The disease usually spreads to the spine by direct extension from pulmonary, abdominal, or pelvic infestation[1].After ingestion the parasite can also reach vertebrae directly through Porto-vertebral shunt by paradoxical flow during transient increase in intraabdominal pressure[9,11,12].Spinal hydatid cysts are located most commonly at the thoracic (52%), followed by the lumbar (37%) and then the cervical and sacral levels (1,3).The parasite cyst generally consist of an inner layer(endocyst) and outer layer(ectocyst).The host defense reaction forms vascularised fibrous capsule(pericyst) which provides nutrition to the parasite. The host defense in bony tissue is marginal and thus outer capsule is usually thin or absent [9].On plain x-rays the cyst is seen as osteolytic lesions with well defined rounded margins without any periosteal reaction. Rarely the cyst can be seen as a calcified rounded mass, however most cysts do not calcify and gradually enlarge over time[9].Computed tomography(CT) scan show well defined hypodense rounded lesion within the marrow, osteolytic lesions, cortical thinning and destruction, bone expansion and extension into adjacent soft tissue.[9,11,13 ].
On MRI imaging the cysts appear as hypointense on T1 weighted images and brightly hyperintense on T2 weighted images, rounded or oval in shape, thin walled with no septations[1,2] and conglomeration of the cysts appear as bunch of grapes. Fluid within the cysts has intensity of cerebrospinal fluid (CSF) with no debris in the lumen [2,6].The lesion shows poor contrast enhancement [1,9] however our case showed bright contrast enhancement around the periphery of the lesion .The MRI appears to be the best pre-operative diagnostic modality which also provides comprehensive information about anatomical relationship to neural and surrounding structures. Diagnosis is difficult to miss when there is a conglomeration of cysts or multiple compartment involvement; however diagnosis is difficult to make in cases with few cysts and single compartment involvement. Differential diagnosis may include Aneurysmal bone cyst, cystic component of giant cell tumor and epidermoid cyst [9].
Definitive diagnosis can be achieved by histopathological examination of the resected tissue. Fine needle aspiration biopsy is an invasive procedure and puncture of a cyst may lead to dissemination and anaphylaxis. [6, 14]
The surgical treatment of spinal hydatid disease should be reserved for symptomatic lesions[9,15].Radical resection of the cyst must be followed by albendazole therapy, however controversy remains regarding the dose and duration of albendazole therapy [6] the mean duration in literature is 3 to 4 months[2,5].
Radical resection in extensive spinal hydatid disease is generally impossible and decompression is the more realistic achievable goal [9].Cyst rupture is very common while resecting from within the vertebral body and can induce anaphylactic reaction along with increase chances of recurrence and dissemination[5,9]. These hazards can be minimized by using steroids during procedure and dissemination can be prevented by injecting the cyst or irrigating the wound in case of spillage with scolicidal agents like hypertonic saline, 0.5% silver nitrate, dilute betadine, glycerin or ethanol [2,3, 9].Chemical sterilization however does not kill all microscopic daughter cysts [9].Some authors also recommend poly-methyl methacrylate reconstruction of the vertebral body defect for its antihelminthic effect [1,9].
The prognosis of patients with spinal hydatid disease has been varied, ranging from complete eradication of disease to multiple recurrences, systemic dissemination and death. Recurrence rates from 30 to 100% have been reported [2,3,5] and investigators in one study suggest that the mean life expectancy after spinal involvement is 5 years [3].

Conglomeration of round to oval lesions with CSF intensity on MRI is nearly definitive of vertebral hydatid disease. Contrary to the reported literature, in our patients, bright peripheral rim enhancement of the cyst wall was seen on MRI. Patients do become pain free and show neurological recovery when treated with resection of the cysts from extensively involved vertebra and paravertebral soft tissue followed by spinal stabilization. We believe that aggressive surgery followed by albendazole therapy offers a chance for a prolonged symptom free survival with this illness, even in cases of extensive spinal hydatid disease. 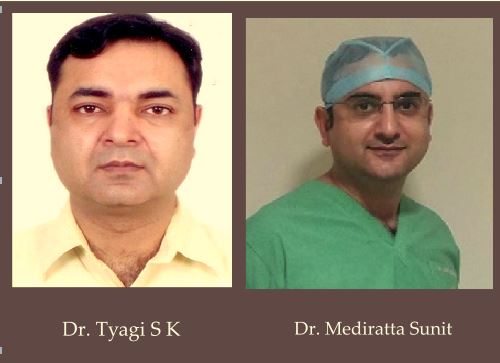